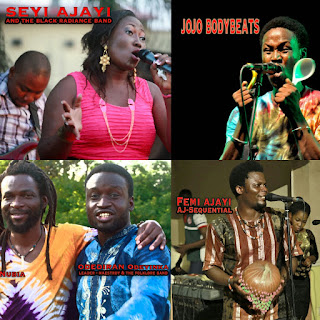 FEMI AJAYI (aka AJ Sequential)
Has the distinction of being the only artist apart from Beautiful Nubia to have performed at every edition of EMUfest so far. Versatile musician, player of multiple instruments with a very sonorous voice. And he can dance too! Femi makes original music in the folk and highlife traditions but he is also remarkable at channelling great artists such as Tunji Oyelana, Blackman Akeeb Kareem and Jimi Solanke. A treat to watch!

SEYI AJAYI & THE BLACK RADIANCE BAND
Beautiful Seyi (no relation to the Femi above) took EMUfest 2014 Talent Night by storm with her soulful, folk-driven music and a soothing, sultry voice. Seyi’s colourful and imposing stage personality was greatly enhanced by the professionalism of her 7-member band. We are thrilled to have them back on the big stage this year.

MR HAT & THE QUODLIBET BAND
This large band of instrumentalists and vocalists literally blew everyone away at the EMUfest 2013 Talent Night. Led by a highly accomplished saxophonist, they segue from one traditional folk tune to another without missing a beat. Captivating stagecraft and striking musicality are their main selling points. Always a pleasure to behold.

JOJO BODYBEATS
You don’t know Jojo? Everybody is supposed to know Jojo! Well, those who have seen and heard Jojo won’t need to read further. However, if you are a stranger to the striking art of Joseph Omotoye, the Bodiophone genius, this is your big chance. Jojo, makes music with his body, using his hands, sticks, spoons and whatever else catches his fancy. He also plays a myriad of percussion instruments, including the gangan drum. His is a colourful spectacle driven by folk songs, drama, comedy and dance. Now you get the picture?

MAESTROY & THE FOLKLORE BAND
This band was another revelation at the EMUfest 2014 Talent Night. The sound is deeply rooted in Yoruba folk traditions with strong and passionate lyrics in the forefront. Just out with a notable first album, this is a band to keep your eyes on.

ASOGE
No, you haven’t heard of them. And that’s okay, because they are a very new all-female group making a debut appearance at EMUfest. Traditional folk songs interpreted using ethereal vocals and traditional percussion such as shekere, agogo, alumole, gangan, etc. You will become a fan.

MANY MORE ARTISTS - Singers, Poets and others will feature at EMUfest 2017 in Osogbo, Abeokuta, Ibadan and Lagos.